Since its founding in 1886, the Corps has been continuously active in the civic life of the village of Stony Creek, with its influence also reaching throughout the United States as well as internationally. Its first appearance in 1887 was a performance to dedicate the Soldiers Monument atop East Rock in New Haven.  Since then the Corps has appeared thousands of times, igniting the crowds as they march and play.

Each year, they participate in several events within Stony Creek; march in Branford’s Memorial Day and Veteran’s Day parades, as well as in parades and musters throughout the Northeast and beyond. In 1957, the Creek represented Connecticut in President Dwight D. Eisenhower Inaugural Parade in Washington, DC.  The Corps has also made several appearances overseas. They have participated in the St. Patrick’s Day Parade in Dublin, Ireland and have won First Prize at the International Band Competition in Limerick, Ireland. During its long history, the Corps has won numerous fifing and drumming awards and trophies, including six Connecticut State Fifers and Drummers Association championships.

Corps participating in the Northford, CT Centennial Parade held on August 22nd, 1931.  Picture was taken by Clarence Burdick in front of the Northford Congregational Church. 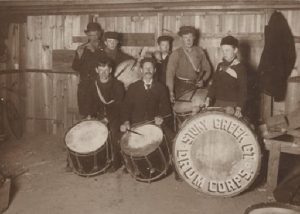 Circa 1890 – Founding members at Bradley’s lobster shack located on Thimble Island Road in Stony Creek, a short distance from our current practice hall. 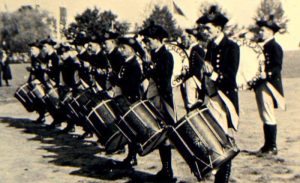 Stony Creek appearing at the 1941 Worlds Fair in New York. 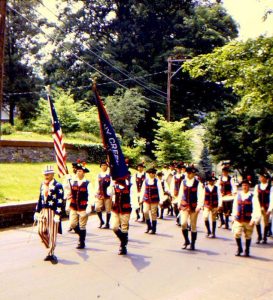 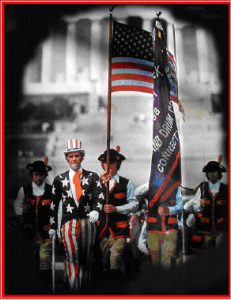